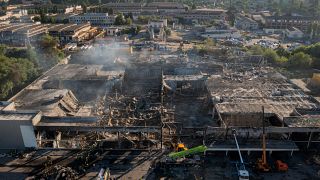 More than 500 workers transferred here when the Azovstal complex became the target of Russian troops, the last Ukrainian strong-hold in the strategic port city of Mariupol.

Kametstal plant was the busiest enterprise of the Metinvest Group. As of the end of March, the plant was operating at 80% capacity approximately. Despite the tense situation, the Kametstal plant continues to upgrade equipment and improve production.

The Director of the Kametstal plant Dmytro Lyppa says "Azovstal became a symbol of our country, of our fight against the enemy. I am proud to work for Metinvest Holding which includes the Azovstal plant. Seeing that example, we do our job and that helps us to believe in the future. We believe in our victory."

However, the plant has been forced to reduce its yields due to logistical issues and high transportation costs.

"We are reducing production costs, but we are losing in competitiveness. We have three furnaces in this plant, but unfortunately only one of them is working today. We have reduced our output by 2/3. We are losing a lot of money" says Lyppa.