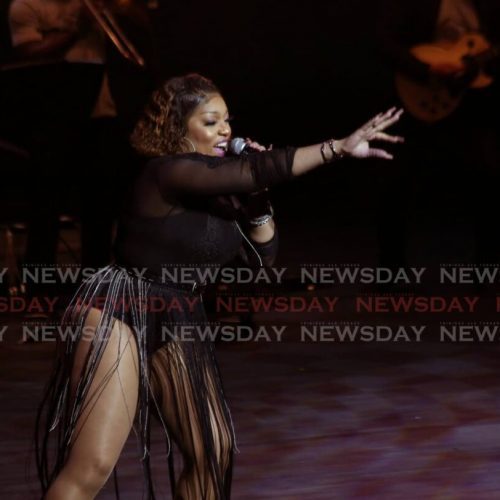 “Thankful,” that is how soca star Patrice Roberts feels about being a part of Trinidad and Tobago-born, US rapper Nicki Minaj’s and dancehall artiste Skeng’s remix of Likkle Miss.

The nine artistes are referred to as The Fine Nine on the six-minute, 11-second official audio video on YouTube.

The video, at the time of writing, amassed 47,000 views on YouTube.Roberts’ publicist Adanna Asson, who is also part of her management team, said, “The song became live on digital streaming platforms around midnight.”

Patrice Roberts is on US rapper Nicki Minaj’s and dancehall artiste Skeng’s remix of Likkle Miss.

She said it has been a couple of weeks since Minaj engaged Roberts directly about being part of a project.

“We did not know of all of the specifics as it related to the song. We knew what song it was. We did not know exactly what she was going to do because it was very tight-lipped.”

Asson said she believed Minaj wanted to surprise everyone. “She just kept saying it was going to be a legendary project. Of course, when she approached Patrice to be a part of the team it was a no-brainer.

Roberts was sent guidelines which said she needs a verse. Minaj sent the music.

“For Patrice, she might be a little lost for words. Just talking to her this morning, she is just really full of gratitude.

She said this was great for soca.

Asson said Roberts worked tirelessly at her music and craft so she was able to generate interest for herself and the genre.

She said the team could only anticipate what other opportunities might come for Roberts as a result of being a part of this.

“Patrice is very prepared for whatever opportunities may come her way. But she is just full of excitement, gratitude and love.”

On her Instagram page Garcia, who calls herself the queen of bacchanal, said it was no secret how she feels about Minaj and “all she does and keeps doing.”

“But this project right here is giving the true meaning of female power, talent and unity…queens.”

Minaj is also seen on a video on Garcia’s page singing Garcia’s part and saying the queen of bacchanal/soca still has her favourite soca song of all time… It’s Carnival (done with Machael Montano in 2003).

In that video Minaj also shouted out Jamaican dancehall icon Ninja Man. She said she loved him.

“A lot of these artistes to me don’t get their just due and they’ve paved the way on inspiring some of your favourite artistes…,” Minaj said. Chamber To Tackle Crime Issue At Security For Business Sympo... Brathwaite fights back in opening test after Labuschagne lan...